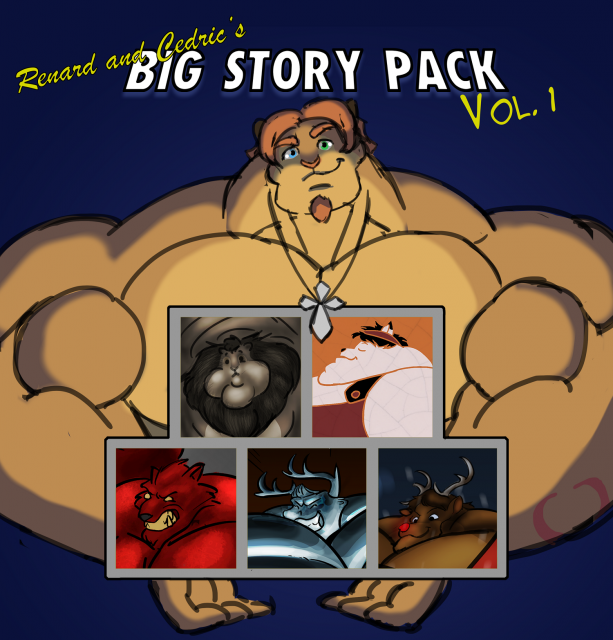 Five choice stories, each with an illustration from my friend and partner, Cedric Browning! Three muscle growth, two weight gain, and all of them voted on by my Patrons from my first full year on Patreon.

STORIES INCLUDED:
SIDEKICKASS- The wimpy stag sidekick of a smug superhero starts training to get big and strong, just in time as a new threat looms over the city, from a corner the intrepid young hero never saw coming!
THE OBESITY, BOOK I- Rediscover an ancient Greek myth about Odysseus' lesser known cousin, Obeseus, champion of Hestia and the greatest Grecian gourmand and glutton.
THE WEREWOLF OF SALEM- Years after the infamous Salem Witch Trials, the son of one of the victims discovers the dark secret of the town's notorious witch hunt, all while coming under a curse that grants him immense strength.
PRIDE AT STAKE- Captured by a mad scientist, a lion must keep his appetite in check to win a twisted game. But how long can he fight temptation?
REINDEER GAMES- Shockingly, a diet of cookies and milk has seen Santa's famous reindeer go to seed. With the help of two bodybuilder trainers, can Rudolph whip the team back into shape?

The Chronicle of Theo