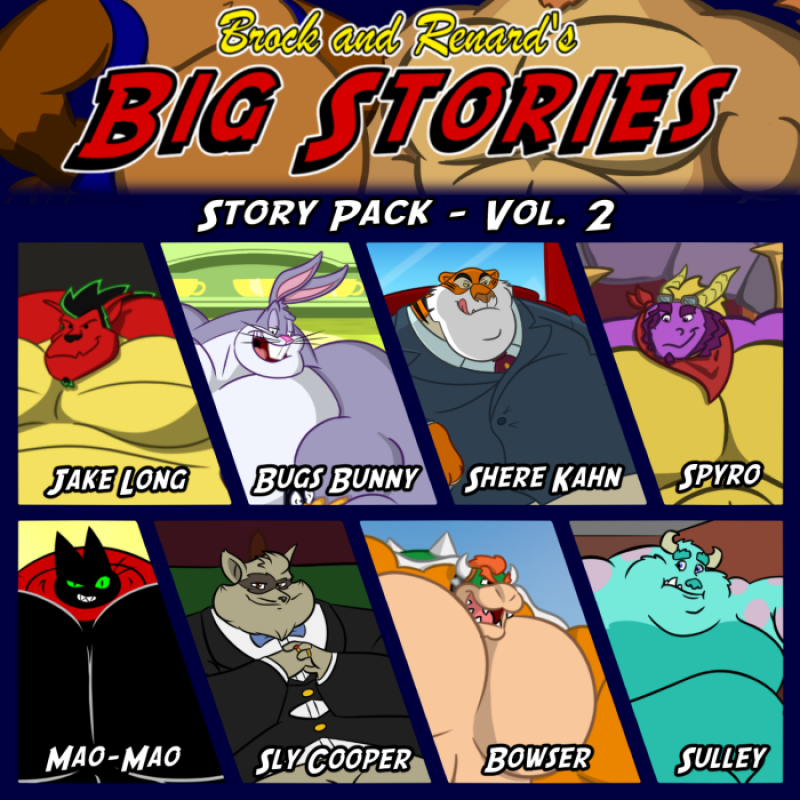 A story pack featuring some of the favorite Big Stories I have written with my partner, Brock Tanuki, on our Patreon!

Product features eight full stories, each one with an illustration, covering muscle growth and weight gain of popular media characters. Stories include:

SPYRO'S BIG DAY AT THE PARK: A grown-up Spyro must save elder dragons from the Dragonshores Theme Park, and uses the park's energy source to hulk out!

SHERE KHAN'S EXPANDING BUSINESS: Shere Khan gets addicted to a new burger chain in Cape Suzette, and uses his business savvy to dominate his new obsession.

THE AMERICAN SUMO: After insulting a Japanese Dragon and making a bad deal with a Tanuki, Jake Long blimps out just when he needs to win a sumo match!

BIGS BUNNY: Bugs Bunny decides to bulk up to put an increasingly obnoxious Daffy Duck in his place.

PHANTOM OF THE FEAR FACTORY: Sully, the new CEO of Monsters, Inc, expands his business into a supposedly haunted factory that seems to be making him and his workers fatter with each passing day.

BIG HEROES NEED BIG MUSCLES: Mao Mao uses his heroic willpower to turn into a hunk of a hero to save the day!

The Chronicle of Theo